Then there were two... 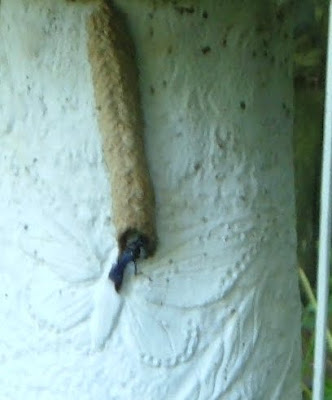 While sitting in the shade of the apple tree, enjoying a  rare cool summer afternoon, my attention was drawn to the cement birdbath in the garden.  Something new was on it.  A strange long cylinder was on the pedestal. Where did it come from?

Soon I had the answer. A black-bluish wasp crawled out of the opening.  I watched it fly away, then return shortly and crawl back inside the cylinder tunnel.

A mud dauber!  I'd seen them build their cement-like nests in the rundown chicken house on Grandma's farm that had been our play house.

As I watched her work, I marveled how this tiny winged one could find her way around this big universe. She knew exactly where to go to get what she needed and how to return home again. She kept up her routine for quite some time. I was so fascinated by the deliberateness of her activity, I wondered about the message.

A search on the web revealed she lays only one larvae in her nest. She collects spiders and insects and attaches them to the larvae to feed it until it has grown to an adult. From the size of her condo, she was expecting a really BIG heir to emerge in the spring.

I watched her realizing all those trips to and fro were to the "grocery" store. Her nest was finished, a handsome one at that. Soon she will plug up the hole. Her mission complete. It's up to the next generation to repeat the cycle, to perpetuate life.

I found a fascinating article written in 1949 by George D. Shafer who after years of study, believes the female has a nervous system that enables her to remember, to learn, and to show individuality. He, too, had an affinity for the mud dauber wasp.

Yesterday morning while feeding the birds, I was surprised to find a new nest beside the first. Twins! 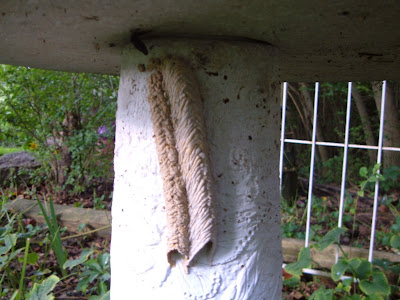 Nature is amazing and I am learning firsthand, that out of nothing, something can suddenly appear that can change your life forever.