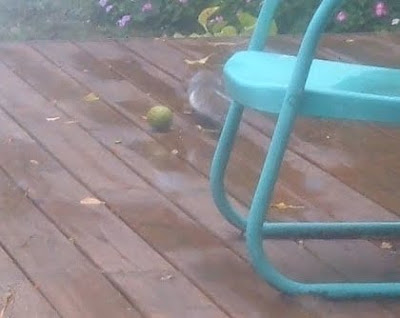 Nature is the language of the soul. Yesterday while sitting on the sofa talking on the phone, I heard a loud thud. A huge walnut dropped onto the deck, followed by a squirrel. My digital camera was beside me on the table. 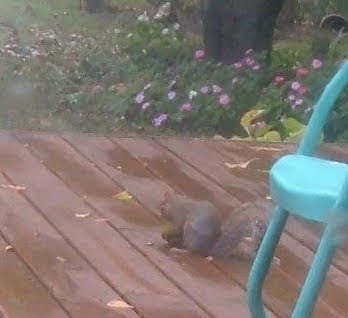 Usually his bounty is an acorn, but this was the biggest walnut I ever saw. Way too big to fit in his mouth. I watched as he struggled to carry off this over-sized prize. Here he is trying to straddle it with his paws. 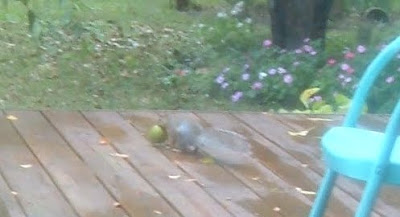 His determination to stick with it, paid off. He headed for the cherry tree and made a leap with the walnut in his mouth. As he landed on a spindly limb, he dropped the walnut, but at least it was now in the yard where he could bury it for another day.

This little episode reminded me of the poem written by N.W. Murray with the Scottish Himalayan Expedition in 1951.

Until one is committed
there is hesitancy, the chance to draw back,
always ineffectiveness.

Concerning all acts of initiative and creation
there is one elementary truth,
the ignorance of which kills countless ideas
and splendid plans
and the moment one definitely commits oneself,
then Providence moves too.
All sorts of things occur to help me
that otherwise would never have occurred.
A whole stream of events issue from the decision
raising in one's favor all manner of
unforeseen incidents and meetings
and material assistance.
which no man could have dreamt
would have come his way.
I have learned a deep respect
for one of Goethe's couplets:

"Whatever you can do, or dream you can...begin it.
Boldness has genius, power and magic in it."