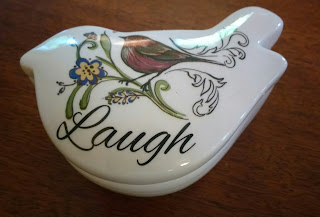 There's an old saying, Laughter is the best medicine.

Here's a case that proved it.  Many years ago, Norman Cousins, a medical doctor, was diagnosed with a rare degenerative spinal disease that was called irreversible with no chance of recovery.  Dr. Cousins understood the power of thought.  His reasoning was if negative thinking causes disease, then positive thoughts should be able to dissolve it.  So he borrowed a movie projector and rented some old Marx Brothers and Candid Camera films and invited his friends to his hospital room.

Here is Dr. Cousins' story of what happened:

"We pulled down the blinds and turned on the machine... It worked.  I made the joyous
discovery that ten minutes of genuine belly laughter had an anesthetic effect and would
give me at least two hours of pain-free sleep.  When the pain-killing effect of the laughter
wore off, we would switch on the motion projector again, and, not infrequently it would
lead to another pain-free interval."    (The Dragon Doesn't Live Here Anymore by Alan Cohen).

By the end of the eighth day, he was able to move his thumbs without pain... and he had discovered the healing power of laughter.

In 1994, I heard his wonderful testimony at The Conclave of Archangel Michael in Banff, Canada. 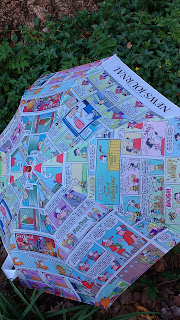 Laughter is one of the best ways to lighten up.  Recently I received a free comic umbrella for a trial subscription with The Daytona Journal.  The newspaper salesperson had set up his booth near a store that I was about to duck in to shop.   I told him straight up, I wasn't looking to subscribe. I don't read any newspapers. But then I saw the cartoon umbrella promotion. The news is in need of comic relief during these stormy times.