Stubborn Will and the Donkey Message: An Angel Message

Remember last week, Elliot and I took a wrong turn on our way to visit our favorite donkey?  The good news was we saw two rainbows that Sunday on the road to and from St. Augustine.

Then on January 2, while reading, stretched out on the sofa in the sun room, I dozed off and woke up to a beautiful spiral rainbow shimmering high in the sky across the street.  I was so thankful to have taken down the curtain toppers last week, or I would have missed the angelic message.  Rainbows are a sign of God's promise, and should not be taken lightly. 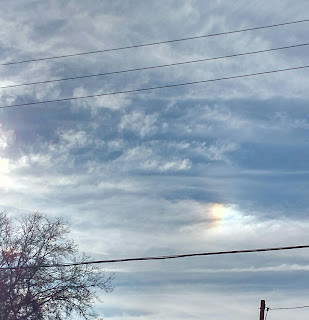 Yesterday, we decided to start the new year by visiting Alahambre, the sweet, loving donkey.  A cool, sunny Sunday, the rural ride through the country-side was expansive, and freeing.

Since our last visit I'd been praying about a situation.  At that time, the strong-willed donkey had a grooming issue.  There were so many little brown burrs on his matted body--much more than usual.  Like tiny porcupine balls, they clung to his long smooth snout, furry ears, and cross-striped back.  One little burr, was close to his eye.

Thankfully,  I was able to free that sticker, but  the rest were far too many to tackle, and painful to remove.   Before leaving that day, Elliot and I had mentioned the burryful burrow to his kind owner, who told us, he brushed the donkey every night, but Alahambre liked to roll around on the ground.

Obviously something had to give, but how, I wondered.

Having compassion for our four-legged friend, since then, I'd been asking the angels for help, hoping that the fenced area would be cleared of the troublesome vegetation.  I even thought about volunteering to help out.

But, it seems I need not have worried.   To my delight, the angels had been at work.

I could hardly believe my eyes as we approached the burrow's fenced in area.  Alahambre's entire  home had been through a major clearing! Large mounds of sticky bush debris were in a heap.

My heart leaped with gratitude, but where was our donkey friend?  He was not there.

Looking farther down the land, what joy to see that feisty donkey.  He had moved to a new location! In the shade of stand of tall trees, he stood by the fence, next door to his two emu neighbors.

His ears perked and he stared wide-eyed as our feet crossed the grassy field toward him.  Suddenly an ear piercing, but familiar welcoming bray filled the air. The owner, working nearby looked up, surprised by such an arousing raucous salute from his burrow.  He grinned.

Across the fence, I reached out to pat the Jerusalem donkey.  His brown furry ears flapped, as he bellowed in a wailing high-pitched crescendo, followed by a powerful snort that expelled a blast of misty air from those powerfully large nostrils.

Wiping my face, I smiled, happy for him and for his new residence.

Such a public display of affection is hard to resist.  That little burrow is packed with love, but then he calms down, ready to receive a soothing word of encouragement, and a soft love pat on his head.

One thing for sure, you absolutely know that he is glad to see you.   That you make a difference.

Imagine what would happen if we were as demonstrative in our affection. If we greeted each person we care for as though we were happy to be in their presence.  If we put down our smart phones, and really listened and looked at that special friend or family member, thankful for the special moment. 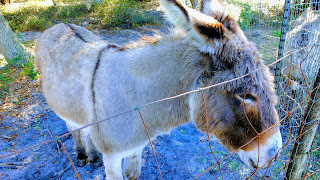 Elliot and I walked on to the fish pond and sat on a bench by the water's edge.

When I looked back,  Alahambre had followed the fence as far as he could, showing us that he still had access to his old lot that had been generously cleared.  He had doubled his space!

Soon it was time to say good-bye.  After a friendly pat or two, with a fond farewell, he brayed before shuffling on down the fence toward his new pad.  I was thankful for that donkey's lesson on both love and will.

The donkey reminds us of our will.   To willfully keep doing the same thing over and over again, and expect different results is the energy of stubborn will.  The soul's will is the energy that makes the steps possible.  By really listening to your heart, you will be able to tell what is right for you.  Our Spirit will always direct us toward the divine plan.  Love will make a way.  Never underestimate the power of prayer.

Email ThisBlogThis!Share to TwitterShare to FacebookShare to Pinterest
Labels: Donkey