The Money Changer: An Angel Message

Elliot came into the living room on Wednesday asking me a strange question.  "Had I lost my money stone?"

"What?" I asked, as he gave me a small brown rock.  I had no idea where it came from, but as with many angel messages my curiosity was peaked. It had some markings on it that resembled two eyes, a nose and a mouth. 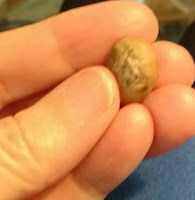 He had just returned from the grocery store on a money mission.  It all began several weeks ago when somehow a large glass container full of loose change had been knocked off the low shelf underneath Elliot's desk.   A steady stream of quarters, nickles, dimes, and pennies scattered across the office floor.  A call that it was time to convert the loose change to cash.

Instead of tediously rolling our coins in bank wrappers, he had noticed a money converter machine at the Publix grocery store.  It turned out to be a quick solution.

In a matter of seconds, the amazing money changer had calculated our coins that had collected in bags over several months.  "Something amusing happened," he told me.  "Whatever was not transferable, was rejected into a retrieval tray. "

That's where Elliot had found the little brown money stone.

I laughed, amazed by the number, clearly an angel message.   But, then he explained that the store takes 10 percent, so our net amount was $81.81 from the cashier.

81.81, another amazing number that also equals nine. I realized something more was going on.  Both sums add up to a 9,  a symbol of completion.

I had no idea how the little stone had gotten mixed up with our loose change.

I could see it was plain on the outside, but glistening inwardly, hidden from the world.

As I stared at its rough surface, a thought began tumbling around in my mind. Rock are commonly referred to as a symbol of God's reliability.   The Bible teaches to build our houses and lives upon the stable rock that is God's love, wisdom, and salvation.

Elliot smiled, "The money comes and goes, but the rock stays." 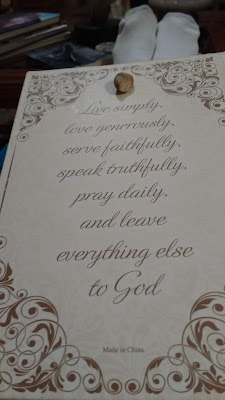