Don't Fence Me In: An Angel Message 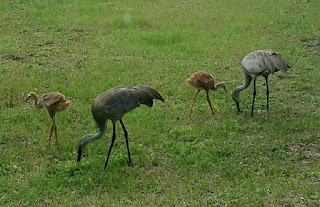 Often times when we try to reach out and help another, a limitation such as a fence can block our immediate success.  But rather than despair, I've learned to ask the angels for help.  Angels are pure intuitive thoughts passing from God to His children.

Earlier this week our family of four sandhill cranes were in a troublesome situation. Mama and one chick were across the road in a wide open field, waiting and watching.  Papa and junior on the other side of the road were trapped inside the cow pasture.  Earlier that day, on our way to the mail box, I found it odd that father and son were inside the pasture fence, hanging out with the cows and horses. That was something new.

That evening, on our walk, Elliot and I noticed the black cows and brown horses had been tucked away in their stables for the night.

The sun was setting on the empty pasture, and something was wrong.

Rather than enjoying their pastoral mileiau, Papa and junior crane were pacing up and down, pecking away at the loosely meshed wire fencing.  Our feathered friends were trapped inside the pasture, eagerly searching for a way out.

Had they been there all day?

Unlike Papa who could spread his big beautiful 6-ft. wings and fly free, junior was a month shy of getting his flight feathers. Papa was loyal and stayed by his son's side.  Elliot and I checked the pasture fencing for an opening, but there was none.

How had junior gotten inside in the first place?  It was a mystery...

My heart was filled with compassion, as we walked on down the dirt lane, letting them be.

There had to be an answer.

The two were still at it when we turned around at the end of the road.   Poking their long necks in and out of the fencing in search of a loop hole in the wire mesh.

I couldn't just leave them alone...now that we knew for sure they were in trouble.  Elliot and I had a bond with this family who frequently visited our yard.  After all, Papa and Mama and the chicks were our welcoming committee from the neighborhood since sheltering-in was in place for Florida when we moved.

Over the many weeks, what joy to watch those  4-ft. tall heavy bodied, long-necked, long-legged parents stroll through the yard, their bright red-capped heads bent down pecking the ground.  Their drooping gray feathers looked like a "bustle" around their back-end as they stooped over to feed their young.  The best part was watching the cute little orange fuzzy chicks teeter along behind the adults. In a month, the two chicks had grown ten times their size, that's quite a growth spurt.

The family always stayed together, with each parent keeping a watchful eye over one chick.  Teams of two, united as four.  They were always within view of one another. That's how we recognized them.

All these thoughts came to mind as we continued our evening walk down the quiet country lane.  I decided to approach the farmer.   I spotted the wife from far off, and shouted, "Hello!"  But she disappeared inside.

Hoping for the best, my feet began walking up their long driveway, through the open gate to their compound.   "Hello!" I called out, each time I took a step forward.  I realized that the timing for meeting new neighbors wasn't ideal due to social distancing.  People are fearful, but the cranes needed help. It was worth a try...if the owners would open the pasture gate.

Walking along, I asked the Holy Spirit for a holy relationship with the neighbors, and also called on the angels for help as I continued toward the distant farm house.

A thought came to mind about dogs.

And, soon, excited dogs were charging my way, barking loud.  For some reason, they made me laugh. A motley crew-- all different sizes and colors.   A little brown and white wire terrier led the pack. Followed by a friendly golden lab.  The large black shaggy dog was a little more serious. And the fourth dog, is a blur.

A fear thought tried to creep in, but I gulped and called out a cheerful greeting to the lively pack of four.  "Look at you all!"  I shouted.  "Hello!  How are you.  It's okay. All is well."

All the commotion alerted the farmer, who came out, and called his dogs.  The dogs were friendly, and so was he.  Breathlessly, I explained over the barking, that we lived down the road, and were out for a walk when we saw the sandhill cranes trying to poke their way out of the pasture fence.

The man, smiled, saying, "That's no problem.  They come and go all of the time."

I went on to explain that junior couldn't fly yet, but again he told me, No worries.

I asked him if he had seen the young crane fly, and he looked at me.  I knew the answer.  Apparently, he'd seen more than his share of sandhills come and go over the years.

In my heart I just knew this was an exception.  But, it would do no good to force the issue.

"No worries," he again assured me. "They come and go."

I thanked him for not shooting me, and he laughed, saying he couldn't get to his gun that fast.

Elliot and I said our good-byes to the man and his dogs.  Walking back down the long driveway, in  the distance, we saw the weary sandhills ceaselessly poking the long fence for a way out.

We'd done our best...what else could we do?  I told myself.

Walking by the frustrated cranes I knew the truth.  They needed help.  Father and son were still at it, not giving up.  Once more we, too, searched with them for an opening.

Papa  pushed his whole head and neck through one loosely linked wired mesh.  His big steel gray body could only go so far, leaving a mark across his chest.  Maybe he was teaching junior how to poke through?

Before long, Papa took a break.  Lifting his head, beak pointing skyward, he let out a forlorn cry to  his mate. Mama Crane and sister chick were waiting in the open field across the road.  Longingly, they gazed toward their loved ones, as they patiently watched, holding the space for Papa and junior to return to them.

Surrender isn't easy but, Elliot and I had no choice.  The answer was out of our hands.  The angels would help, somehow...

At home, after an hour or so, I just wanted to make sure those cranes were free.  That our prayers had been answered.  The sky was a glorious celestial pink, with golden orange rays, as we drove to the pasture,-- our necks craned in search of the sandhills.  A peaceful hush blanketed the land.  We drove to the mailbox, and there was no sign of the pair.

Returning down the road, heading toward home, I looked for a sign of the sandhills in the pasture.  Berating myself for asking for God's help, and then in doubt, going to check it out.  Double minded... Where was my faith?

Then, I saw them.  My heart sank.  Father and son were still seeking and seeking....put out to pasture.

An idea came to get a board from the garage to use as a walkway over the pasture fence.  We sped home, and returned with something better.  A  house window shutter.  The slats would make a perfect ladder.

The sky was turning to dusk as Elliot set the long white shutter up against the fence, trying to coax our feathered friends to climb aboard.  But, the concept was foreign to the long-legged cranes.  They simply squawked, and strutted underneath the board, anxiously poking their long beaks at the pasture fence to break free.

Once more, I said a prayer.  What else could we do?  We packed up the shutter, and just as I was letting it all go, relying on divine order, I turned around and happened to see Junior outside the pasture by a tree, he stood free in the middle of the lane!  How did he do it?!  I laughed, in disbelief.

Then I had a humorous thought...

Maybe, just maybe, an angel gave him a BIG mercy push to squeeze through to the other side.

Whatever, Papa was free to fly, and with that miracle, we headed home, thankful for a happy ending and a chance to see such a beautiful sunset.

The next day, the crane family was nowhere to be seen.  I thought perhaps they had moved on, not wanting a repeat performance.  But I was wrong.  The following morning, the family was reunited, once again pecking away in search of grubs in our yard.

Cranes symbolize noble guardianship, and that sometimes you can be that for another.