The Power of One: An Angel Message

On our way out to take a walk this morning, an angel thought nudged, go take a look at little Gracie, our resident juniper bonsai on the back porch.

Sure enough, a new story had sprung up in the miniature garden box.

A big single umbrella capped mushroom had blossomed. The biggest one so far, and the only one present.    A closer look revealed how it was bent on leaning forward, stretching toward the light.  The tiny spider's spiral web was still intact on the bonsai's green bough.  By the way, I named her Faith, and she, too had expanded her web with wispy wings that extended her territory. 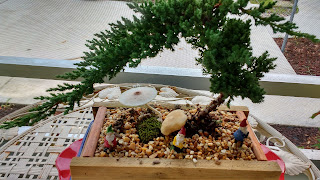 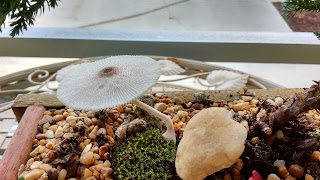 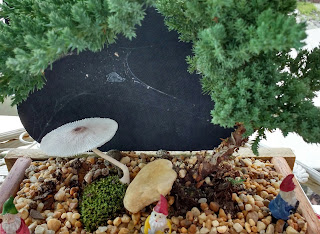 What I took away from this endearing scenario was how important it is not to underestimate the power of one to make a change in the world. One juniper bonsai, one single mushroom, one tiny spider, one willing person, all creating a message of light together.  After all, one plus God is a majority, and that's the only thing that counts in the end.

Love and many blessings,