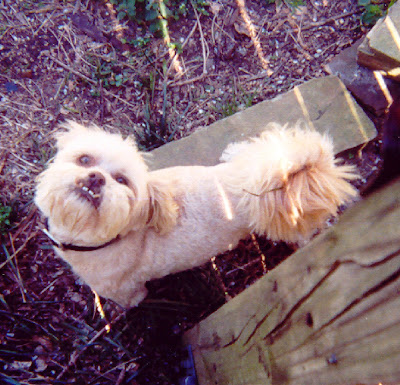 Elliot and I took a shortcut home from our walk in the park. Mother Nature was calling me. The detour took us by a little dog pacing up and down outside the fence of a big house. When he saw us, he ran toward me. I wasn’t sure what he wanted, but decided to lean on the side of love rather than fear. I bent down to pet him and he looked up at me with the most loving amber eyes. This dog was a sweetheart who needed a friend.

Having just read a book on animal communication, I confessed my skills were limited. "I wish I understood you better. Is this your home?" He looked at me as though it were. There were no cars in the driveway, but it appeared he was locked out by mistake. I remembered the house. That’s where I found a pretty writing desk on the curb the previous year. We had asked the owner if it was for the taking and she gifted us with a matching chair. Thinking back, I seemed to recall a little furry ball barking at us then. I was 99 percent sure this was the dog…until I peeked over the fence. Another dog was basking in the sun on the sidewalk. Neither dog barked, but we decided to leave the little dog in care of the angels while I hurried home to the bathroom and to call his folks whom I vaguely recalled were chiropractors.

The receptionist at the office, said the description matched Footstool. Could we let him back in the yard? Quickly we drove over there, hoping he hadn’t run off. Footstool was patiently waiting outside the gate. A man with a pit bull on a leash had just walked by. But Footstool held his ground. He was so excited that we came back. He ran toward the fence, cocking his head leading the way. “You’re going home,” I told him, opening the wooden gate. Happily, he scurried inside and then turned around as if to say, “Whew! There’s no place like home.” I thought about Footstool and what a good example he set. He wasn’t running all over the neighborhood trying to solve his problem. Loyal, he waited outside the gates of home knowing sooner or later, the doors would open wide and he would return to his kingdom.

A few days later, by chance I read a Bible passage in Isaiah where the Lord said the earth is his footstool. I had to smile at the synchronicity.