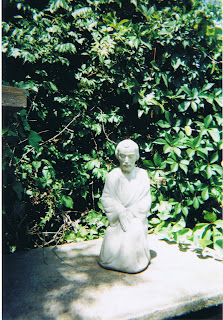 Saint Francis opened my eyes to seeing God in all life. He truly felt that everything that existed from angels to insects to rocks was part of his dear family. He taught God's love through the creatures around him. All were his brothers and sisters. They seemed to recognize this and flocked to him.

We had a lesson in seeing love one Saturday morning while living on Atlantic Avenue. Ants had set up camp in our kitchen. Not wanting to kill them, Elliot put an envelope on the countertop and dripped a dab of honey, hoping to draw the ants onto it. Then he planned to escort them outside later. We went about our chores, letting them be.

An hour later, I went to the kitchen for something. To my surprise the ants had gathered on the envelope, forming a heart as they sipped around the honey! I ran to get Elliot. Sure enough, when we returned, they were still in heart formation. "Love is the answer," he smiled.

My friend Debra was in town. She was coming over later. Elliot wanted her to see the ants, but I wasn't so sure. I kept the door to the kitchen closed. During her visit, she asked, "May I see your kitchen?" (I forgot to mention that Debra is psychic.)

My ego blurted out, "No!" embarrassed by the ant problem. But rather than have her think I was a messy housekeeper, I let her into the kitchen. The ants were still there. Side by side, sharing the nectar of life in a heart shape. The three of us watched in amazement and I realized that I don't know the real meaning of anything. But when I can remember to look at all things with love and gentleness, that's what I'll see.

In his book Animal-Speak, Ted Andrews writes, "Ant is industriousness, order and discipline. Ant teaches us that regardless of circumstances, if the effort is true, the rewards will follow in the most beneficial time and manner. Ant is the promise of success through effort."

I almost forgot to mention, ants also symbolize patience. I was hoping by now I had enough. We thanked the ants for their wonderful message. God truly speaks to us through all life and the message is always love.
Posted by Rae Karen at 12:11 PM