What are you parroting to yourself? An Angel Message 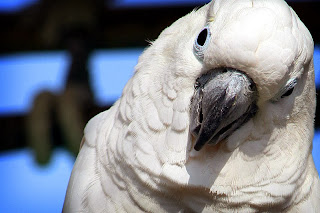 Life can be full of surprising messages.  Many years ago, I walked downtown to meet my girl friend for lunch.  An annual Art Festival had traffic blocked off on Main Street.  Rather than worry Joanna wouldn't be able to park, I decided to give gratitude that she would be guided by the angels to the perfect spot as the restaurant parking lot was also closed.

As it turned out, she arrived long before me, and had secured a choice table on the patio by the waterfalls.  The restaurant was packed.  I smiled, recognizing things are in divine order.  Joanna had found the last parking space in a nearby lot.

As I pulled out my chair to join her, a worried woman seated at the table behind me confided that she was meeting someone for the first time; they'd met on the Internet. He was coming from out of town,  where would he park?

Having just witnessed the angels at work, I told her not to worry, the angels would guide her date to the perfect parking space.  She smiled and took my hand, grateful that we both spoke the same language.  Before long her new friend showed up.

Outdoors in the fresh air and sunshine, Joanna and I enjoyed a delicious lunch.  Midway our meal, I spotted a shiny penny, a wonderful sign from the angels that everything is in divine order.  A little lizard sunning on the porch railing by the waterfalls scurried away when I pick up the coin.  Detachment is what the lizard teaches, break from the past.

After lunch, as we were leaving the patio dining area, a table up ahead caught my eye.  A man was busy texting, ignoring his dining guest. What a surprise to see a large feathery white bird seated across from him with a little bowl of water all his own.  I took it to be a toy animal until it tilted its head, and blinked.

I blurted out, grinning,  "You're REAL!"

The man put down his phone to put on a show.

Do you love me?  He asked this beautiful bird.

In amazement, I watched  the animated white parrot hop onto his master's palm. And give him a tender peck on the ear.

The next command,  Give me a kiss, brought immediate results.

On cue, the obedient avian planted a smacker right on his master's lips.

After applauding the performance, Joanna and I moved farther down the row of tables.  That's when I heard the last command.  Now, flick off the nice ladies.  The man laughed.

I glanced back, not sure I'd heard him right.

I couldn't believe my eyes.  That big feathery white parrot raised his leg up in the air and standing on one foot, stuck a one big talon in my direction.

Getting the bird from a bird! was way too funny to be insulting.

"Now you have to give me a kiss," laughingly, I told the parrot, but he just stared and blinked.

Apparently, this man had taught his bird many things.

Nothing happens at random, so later, I wondered about the unusual encounter.  I looked on-line for  the symbolism of a parrot.   The answer brought a smile.  Parrots are the record keeper for the thoughts you tell yourself.

What thoughts are you parroting to yourself?

A quick inventory revealed, often not so positive.

Early the next morning, half asleep in bed, I heard a still small voice,  "Be still and know that I am God."  That was a command worth following.  I relaxed.

The white parrot came to mind.  How he'd been trained to react on command.  I'm like that parrot at times, listening and obeying the ego and not thinking the wonderful thoughts God has about me.

The parrot also brought home a lesson on non-reaction. If someone insults you, you don't have to take it seriously.  Just laugh it off and move on.

In the Angel Messages, The Oracle of the Birds.

"The parrot, with its deafening squawk, rudely awakens us out of our sleep of complacency and spiritual idleness, and urges us to aim for higher things.  It announces: "Take the long, broad grand highway as far as your perspective is concerned, because life is eternal! You are eternal!"

Another parrot recently crossed my path at The Neighborhood Center.  I'd  stopped by to drop off some donations.  On my way out the door, this colorful parrot was on the shelf.    Now Polly stands by my computer, a reminder to watch what I'm parroting to myself and the world. 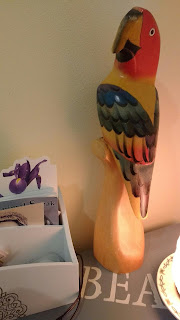 This handy little chart - God Has A Positive Answer turned up in a little shop downtown called,  Somewhere in Time.  A wonderful response to our negative ego commands.