And, A Squirrel Squawking in an Old Tree: An Angel Message 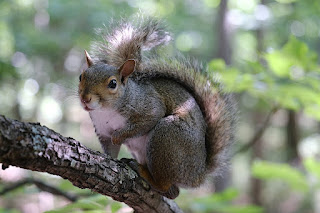 I guess you could say the advent calendar door yesterday came from an unlikely source, a squirrel! When nature raises a raucous, I try to pay attention. Angels often communicate messages this way.  Yesterday was no exception.

As I got out of the car, a loud weird noise came from the old tree by the driveway. It sounded somewhat like a squirrel's protective chatter.  Curious, I took a look.

High on a branch, a feisty little squirrel stared down at me, blathering in a long angry streak, he shook his bushy gray tail at me. There's nothing like a reprimand from an upset squirrel. Squirrels are about balance; balance in work and in play; in giving and receiving.

Amused by his irate antics, I wondered, why all the loud chatter?

Listening to his incessant call, I recognized he began to make sounds like a chicken,  puck-puck-puc-kee.   He repeatedly shouted.

Then it hit me.

The squirrel's upbraiding, brought a sheepish smile.  I'd been deliberately chickening out by avoiding something important that was mine to do that day.  Fear was holding me back from giving, from sharing love.

I decided to just do it, and quit being chicken-hearted, which I did, and all went well. And, I didn't hear another peep out of the squirrel.

What messages are you receiving from the angels?  It's the season to reach out and love one another.  Is there someone you need to call today?