The Howdy Bird: An Angel Message 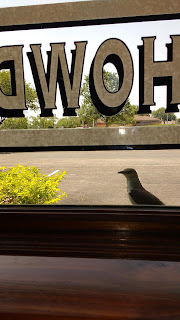 Earlier this week, Elliot and I had a rare treat at lunch in Saint Augustine.  This curious baby bird landed on the outer window ledge by my side of the table.   Wide eyed, he stared up at me, cocking his little head and opening his mouth wide. His sudden appearance brought a rush of joyful goosebumps as I told him I would save some bread for him.  When I took the picture, he flew down  to the ground by the bushes.  He was so endearing that I wanted more, so I peeked over the ledge and called to him.  To my surprise, his little wings fluttered back up on the outer window sill where we could clearly commune eye to eye.

His timing was uncanny as we were talking about going back to Virginia for a visit.  A confirmation of sorts.  The Red Lobster restaurant had been one of Mom's favorite places, not that she had ever dined at this one.   It did seem as though that little birdie was a sign that Mom is still with us, an angel on the other side. I know Love is eternal, it never dies.

Later I read in Animal-Speak, that the dove is a symbol of traditional feminine and mother symbols. "It is a ground feeder, reflecting the need of keeping contact with Mother Earth and the creative possibilities of the feminine energies on earth."  Dove also represents peace, maternity, and prophecy.

This heaven-sent messenger was especially comforting as a dear friend of ours was preparing to graduate from earth school, a spiritual birth.

Leaving the restaurant with my biscuit in a paper napkin, I looked for the little birdie, but he had  flown away.  Crumbling the bread, I left it under the bush, in case he returned for a snack.

Something amusing happened when the cropped photo had been uploaded on my computer.  I let out a little laugh.  The truncated CHOWDER lettering on the window now backwards spelled HOWD!  HOWDee.  The Howdy Bird!  I love these playful angel messages that wing their way into our lives  just when they are needed the most.

Enjoy your day with the angels and look for the happy things to fill your day.