The Inchworm Song: An Angel Message

Sometimes an angel message may come as a song.  That's what happened earlier this month.  A long forgotten childhood melody played in my mind while sitting on the sofa looking out at the woods.   A sweet refrain, I wanted to know the title.  After humming a few bars, the words, "Inchworm... inchworm..." were a helpful clue.  The mystery song was then easily found on youtube.

The Inchworm Song, was sung by Danny Kaye in the 1952 movie, Hans Christian Anderson.  Funny, I don't recall the movie, but the song's angel message was a timely one.  The little inchworm is so involved in measuring the marigolds that it completely misses out on the beauty of each individual flower.

The song brought a sheepish grin because lately I've become more analytical at times, making comparisons, and falling short in counting my blessings right here and now, day by day, and there are many.

Then a short time later, the lesson came again in a playful way to make sure I got it.

On a morning walk to the mailbox,  suddenly before my eyes, a tiny little green creature dropped down from the blue sky on a fine silk thread.  I laughed at the synchronicity.  The tiny inchworm hunched its back, and then stretched out again, expanding its trajectory while swinging on a soft breeze.  Curious, I looked up at the sky.  It didn't appear to be anchored to anything material above it.   No trees...power lines...

Inch by inch, the tiny inchworm dropped down, enjoying the ride, while fully supported by an invisible force from above.   Not wanting to disturb its important mission, I held the camera LCD screen up close as proof it had actually happened.  I wanted to capture the moment as the little creature swung like a pendulum back and forth before me.

When the photos were uploaded, the little inchworm appeared to be larger, and farther away than it  originally was--close enough for me to touch it.

But here I go again--measuring like the inchworm in the song, instead of appreciating the wonder and timing of that comforting, loving, and inspiring angel moment. 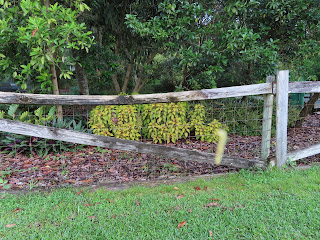