Tortoise and the Pink Periwinkles: An Angel Message 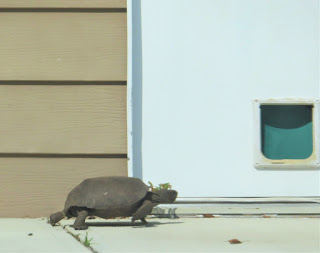 Something amusing happened yesterday that I want to share with you.  When Elliot and I got home in the afternoon, as we pulled into the driveway, what a surprise.  A large tortoise was making tracks by the garage.  It's been ages since a turtle/tortoise sighting here, and his timing was good. "Slow and steady wins the race."

In the short time it took to get out of the car, our hard shelled messenger had disappeared.  Then… the wild pink periwinkle flowers began shaking back and forth behind a low bush by the garage door. 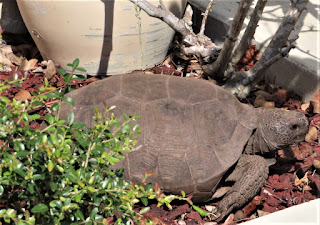 A head peeked out from under the green leafy bush.  LOL. The tortoise came out in the sunlight to take a bow.   Apparently, he wanted to be in the angel blog. :-D 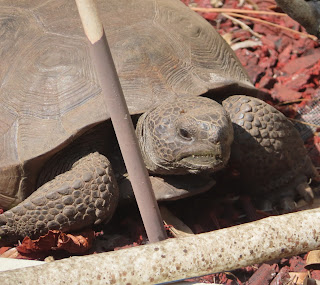 I thanked him for the encouraging message to keep on moving in a slow and steady manner. Don't quit no matter what!  Just like a tortoise carries his home with him, so do we carry the house (consciousness) of God with us wherever we go.  We live and move and have our being in Him.    Nothing can ever separate us from the Love of God.

Happily, I moved the garden hose so the tortoise could make a smooth exit and be on his way to victory.  His arrival was just the tonic needed to break the mesmerism of any fear or doubt.

Later, for fun, I looked up the symbolism of periwinkles.  In German, it is known as the Flower of Immortality, and the color pink is divine love.

Remember you are never alone. God will never leave you comfortless.  He has given His angels charge to watch over you. Rejoice.