The Missing Donkey: An Angel Message

We can all recall times when someone or something keeps coming to mind. Like a cameo appearance on the movie screen of your life, a thought stirs you to take an action.  It could be to send an email, or make a phone call, or say a silent prayer, or to go somewhere. The first time it catches your attention, you may be in the middle of a task. Then, over the next several days, it will gently knock on the door of your conscience, until you realize this is an angel thought, pure intuition of Divine Love offering an opportunity to be a blessing.

On the eve of Thanksgiving, an angel message prompted, visit the orchid farm.  Our donkey friend had been coming to mind for several days.  Welcoming an outing, I grabbed some carrots from the fridge. The last time we'd seen Allahambra, he appeared to be feeling under the weather.

Anxious to see him again, we hurried to his corral.  But it had been plowed clean.  Bails of hay were lined up by the fence.

A stillness was in the air, as we called to him.  Sometimes he stays back in the woods, and trots forward to greet us.  But this time, there was no sign of that lovable Jerusalem donkey.

We walked further down the field, to see if he was at another pen where we had last seen him.  But no bright eyed donkey answered the call to come get a carrot.   A pair of emus, in the next pen, stared when I asked them what happened to their donkey neighbor.   Belching grunts offered no clue as I watched one of the large ostrich-like birds sip water from a bucket.

With no sign of our friend, Elliot softly asked if I wanted to go inside the orchid warehouse to find out about him. But something told me to just let it be.   If we needed to know, someone would appear to tell us, I told him. Maybe that Jerusalem donkey had finished his earthly work and gone home.

With these thoughts, we walked back down toward his old corral for one last try.

When I looked up, I could hardly believe my eyes.  It was like a mirage. Allahambra was standing in the middle of his cleared lot, with a quizzical look.  Why all the fuss?

My heart jumped for joy, in that moment of resurrection energy.  And, that sweet Prince, kissed my hand, after chomping down on the carrots I fed him.   I smiled, realizing that I'd lost all fear of feeding him up close and personal.   After all who can resist such an adorable loving face?

At home, I looked up the donkey symbolism again.  "Be wise but humble in a new opportunity. People are noticing you, so you do not need to promote yourself.  Stubbornness can hinder."   If you're reading this now, the message is for you. 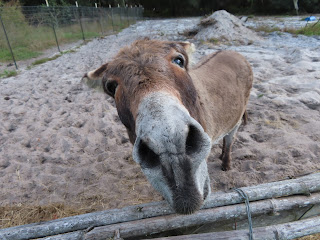 We all need each other now more than ever.  Is there someone the angels are encouraging you to reach out and bless today?