Transformation - A Gift of Change 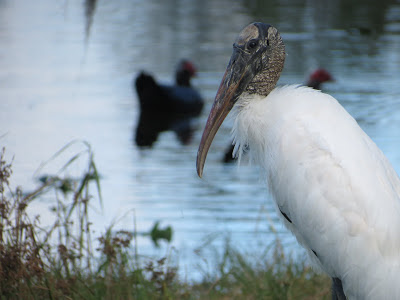 This unusual bird appeared as soon as we pulled in the parking lot to enjoy lunch.  In amazement, we watched as he slowly emerged from the tall grasses by the pond.   I was so thankful that  he was patient, striking several poses, before spreading his wings and taking off.

We tried to figure out his lineage...an older sand hill crane?  a wise stork?  a white heron?  None seemed quite like a fit.  His head like that of a turkey and his long beak like a stork, his snowy white feathers, a heron?

Sometimes angels appear in the form of birds...so later I got to thinking that maybe he was a rare combination of all those traits.  The abundance and thanksgiving of a turkey; creativity and new birth of  a stork; and the strong spiritual reliance of a white heron.  This train of thought led me to the idea of what we may appear to be as we become more like our true spiritual being.  We, too, will become a new creature in Christ, with wings to open wide, carrying us on gentle winds to marvelous new realms. Freedom.

Enjoy your day with the Angels and watch for their inspiring messages.