He Has Risen! - An Angel Message 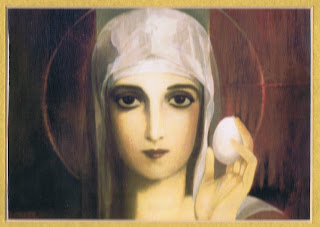 Coloring  eggs has been a long time tradition for children at Easter time. I was fascinated to learn of a biblical testimony about Mary Magdalene's role in this tradition.

After Jesus' resurrection, Mary, a woman of wealth and great status used her position to gain an invitation to a banquet given by Emperor Tiberius Caesar. Upon meeting him, she held a plain white egg, exclaiming, "Christ is risen!"

Caesar laughed, saying, Christ rising from the dead was as likely as the egg in her hand turning red. But, before he could finish speaking, the egg had turned bright red!

"Christ is risen, for Jesus has burst forth from the tomb," she cried, and then continued to proclaim the Gospel to the emperor's guests. The miracle of the egg turned many to Christ that day.

I love the symbolism of the egg representing new life. Christ bursting forth from the tomb! Angels are part of the resurrection story. They are part of our story as well, helping us to roll back the stone of mortality and ascend to a new altitude of consciousness like the Christ, our true spiritual Identity..