Turtle to GO! An Angel Message

With the summer officially beginning yesterday, nature turned out to celebrate the solstice in a big way.

A small hand-carved turtle at the farmers' market caught my eye. "Turtle to go!" I smiled at the vendor, tucking it in my bag along with the tomatoes and squash. 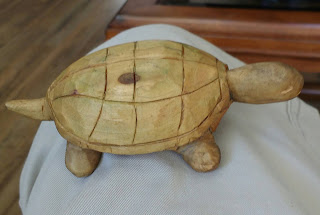 Synchronicity was at play.  On our way back to the car, a giant tortoise was on the loose in the marketplace!  The biggest I've ever seen, over 125 pounds.

His dinosaur snout and pigeon-toed feet began moving toward me.  Being a tortoise fan,  I went over to greet him.  That's how I met BIG BOY, an 18-yr. old African Spurred Sulcata Tortoise (the 3rd largest species in the world).  His owner had raised him since a baby.  The tortoise has a life span of 150 years.  So guardian arrangements have been made for his future.

The personable BIG BOY was out of his shell, basking in the limelight.  I gave him a friendly pat on his beautiful domed back that looked like wood.  "He can feel that," a young girl told me.  His shell is like the enamel on our finger nails, sensitive to the touch. 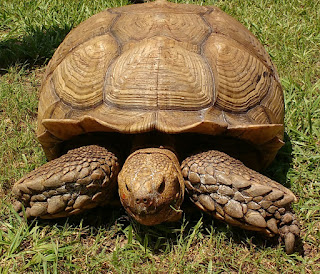 Meeting up with BIG BOY was just the boost needed.  The tortoise wins the race...so take it slow and steady, one day at a time.


At home, I looked up the symbolism once more.  "When a tortoise appears on the path, we have usually been experiencing many changes and many burdens, and although it may not seem so, its appearance now indicates that the dawn is slowly approaching  Carry on, moving and facing things steadily and slowly.  The tortoise has been around a long time and reminds us that though the responsibilities have been great, we will succeed in time."

The little hand-carved tortoise is on the mantle as a reminder to keep trusting God.  Love will make a way.

Enjoy your day with the Angels.  Happy Father's Day!